SRAM PR has worked the news of its expensive AXS (‘access’) groupset into far corners of the cycling universe, launching alongside a battering of cross-channel targeted advertising, manufacturer partnerships and paid promotions. It’s one of the industry’s most aggressive launches in recent times.

The move to 12 cogs suprised nobody, increasing range without increasing intervals between gears. To find greater range without a large increase in weight, all available AXS cassettes include a 10t sprocket, enabled by SRAM’s new and backwards incompatible XDR freehub standard. Money being no object, and for those wanting to ride bicycles with a single chainring or through extreme terrains, this additional range will be useful. For those at the racey end of the road cycling spectrum, the case for additional range is weak at best, with the strongest riders occasionally opting for larger-than-standard chainrings, but never for the lack of smaller sprockets. Wide range 11-30+ cassettes are gaining in popularity, but not among racers. 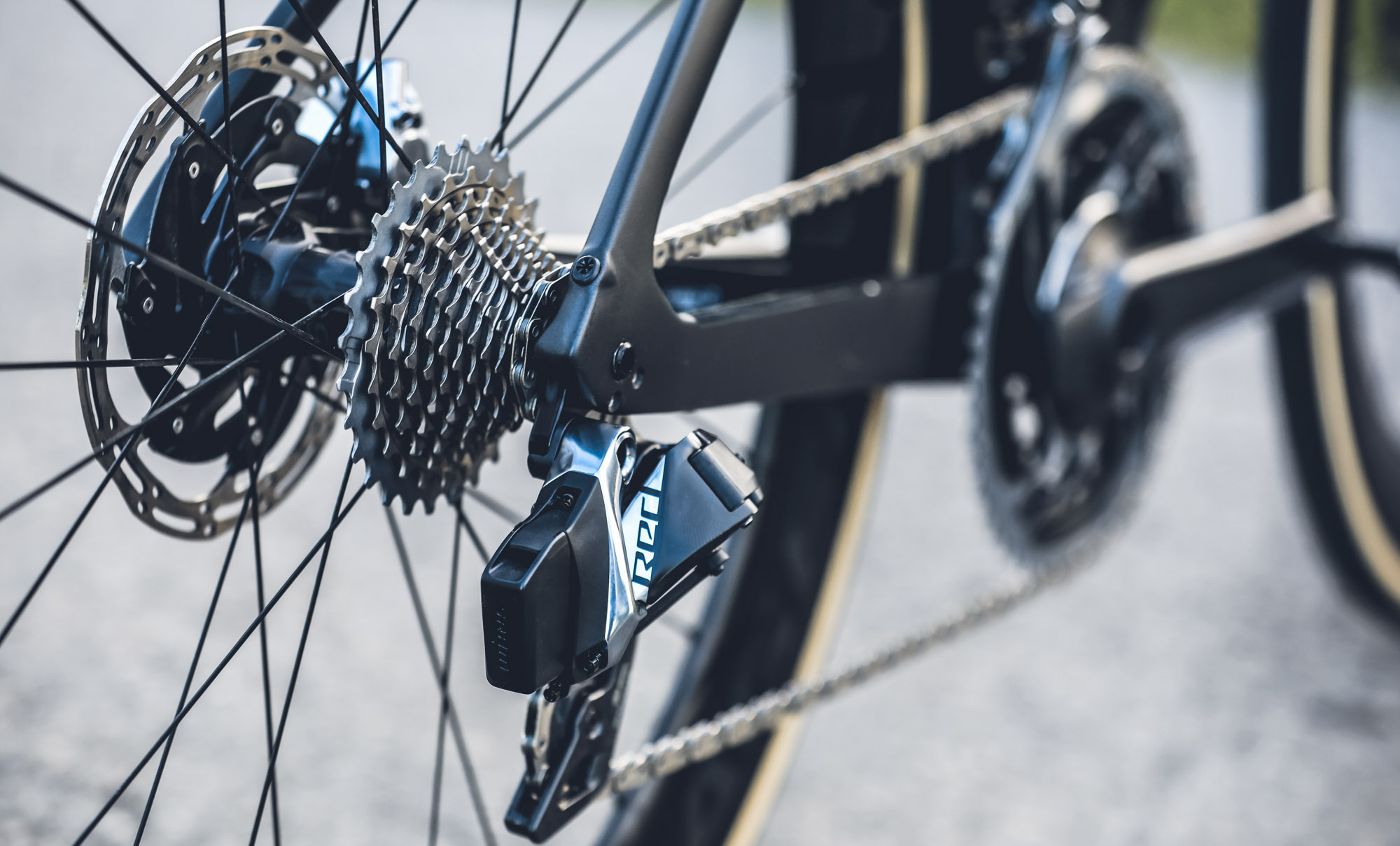 The issue is that small sprockets are horribly inefficient. Low chainwheel diameters increase chain articulation and chain tension, increasing friction and wear. This study showed a 2% loss in efficiency between 52-15 and 52-11 at 90RPM, and proposed a model supporting the intuition that efficiency lost when dropping from 11t and 10t far exceeds that of switching a 15t for a 14t, for example. None of this is news to engineers or many competitive cyclists, and underlies the pervasiveness of 58T chainrings in the time trial scene and oversized derailleur jockey wheels. This is common knowledge – walk into a UK track competition in 2019 and half of the field will be running 60t chainrings or larger, and certainly nothing smaller than a 14t rear. Large chainrings are marginally more efficient in isolation, but enable the use of a larger rear sprocket for a given ratio without cross-chaining, which is where the real gains are found.

SRAM has gone in the opposite direction with AXS by offering three chainrings sizes, the largest of which is just 50/37. Riders accustomed to 53t chainrings will have to ride one tooth smaller to achieve roughly the same ratio with a 50t chainring. However SRAM dresses this up, it is simply less efficient and worse. However efficient the new flat-topped chain may be, the likelihood of it offsetting the deficit is remote.

“Overall the biggest efficiency gain from the system is driven by having a smaller difference between the front chainrings and at the same time using a substantially larger cassette.”

“The smaller difference between the chainrings means that it’s mechanically simpler, and compared to the traditional chainsets, which are a 16-tooth jumps, we are about 20% better in terms of efficiency in change with only a 13-tooth jump. That also means that the recovery at the rear is only one jump too, not two or three cogs like we see on our rivals.”

His point is clearly that a smaller jump between chainrings makes for more efficient front shifts. To offset the increased chain articulation around smaller rear sprockets, it appears that SRAM’s model of efficiency must incorporate a lot of front shifting.

Bicycling.com also touches on the subject:

SRAM’s biggest competitor, Shimano, has long stated that larger-diameter rings and cogs are more efficient because they reduce friction. However, SRAM’s representatives state that studies have shown that the increased chain tension created by the smaller-diameter rings improves efficiency. I requested a link to the chain-tension study SRAM’s representatives were referencing, but it has not been provided.*

Jason Smith (of Ceramic Speed and FrictionFacts fame) goes on to debunk this in the same article:

“The only reason I can think of that SRAM might claim [increased efficiency from higher chain tension] is because of a paper from the 1990s, which I mentioned above. This study (incorrectly) claimed that increased tension increased efficiency. The experimental errors and incorrect assumptions found in this study have been well documented.”

Road.cc warns you not to worry about this issue, because SRAM says that it’s fine (basically admitting here that there is some loss associated with smaller teeth)

SRAM says it tested the efficiency in its own lab and found the difference to be so small it’s not ever worth worry about. It argues that any loss is offset by other benefits the groupset offers.

There are things to like about AXS, but I’m baffled by the sacrifice of efficiency in what is a pro-tier groupset to be imposed upon professional race teams. The groupset is also considerably heavier than Shimano’s flagship and far more expensive. Hopefully some lab data will emerge to put SRAM’s BS to bed.